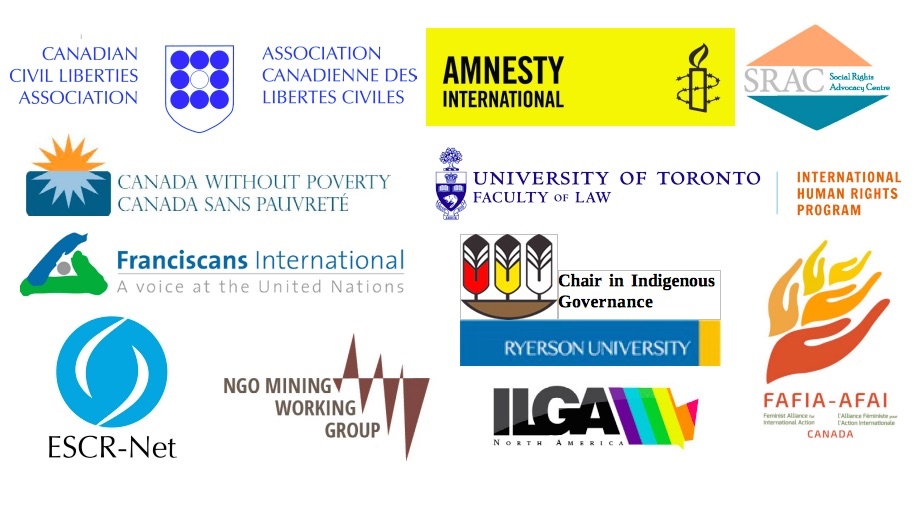 (Ottawa, July 23, 2015) The state of human rights in Canada has seriously deteriorated since the United Nations Human Rights Committee last reviewed Canada’s record a decade ago. Today the Committee released its concluding observations and recommendations to Canada on its implementation of the International Covenant on Civil and Political Rights (ICCPR). They reflect the comment made by a member of the Committee to the Canadian government delegation: ‘This is not the Canada I once knew.’

The Committee’s concluding observations express serious concerns about new human rights issues, such as the impact of the Anti-Terrorism Act, the chill on freedom of expression and association, the failure to regulate the activities of Canadian corporations operating abroad, the failure to provide health care to all refugees and irregular migrants, and indefinite detention of non-citizens. They also express concerns about long-standing issues on which too little progress has been made, including Canada’s failed relationship with Aboriginal peoples, pay equity, discrimination and violence against women, and inadequate implementation of international human rights obligations.

The Committee repeats its concern over Canada’s failure to respect the rights of Aboriginal peoples. It takes Canada to task for policies on Aboriginal title that, despite Canada’s claims to the contrary, amount to pursuing extinguishment of Aboriginal rights, including title.
The Committee notes that the basic needs of many indigenous peoples are not being met; that indigenous women and men are overrepresented in Canada’s prisons; that child welfare services on reserves are underfunded; and that Canada has still not completely eliminated the sex discrimination from the Indian Act. In addition to correcting these failures, the Committee urges Canada to fully implement the recommendations of the Truth and Reconciliation Commission.

Adding its voice to growing international criticism, the Committee notes Canada’s failure to take adequate action to address the crisis of murders and disappearances of Aboriginal women. As a matter of priority, the Committee calls on Canada to hold a national inquiry as recommended by the UN Committee on the Elimination of Discrimination against Women, in order to coordinate police response, and address the root causes of the violence.

During the review, Committee members expressed alarm about recently adopted federal laws and State-sanctioned activities that dramatically curtail the space for dissent, advocacy and defending human rights in Canada. At stake are the fundamental freedoms of expression, assembly and association; the very pillars of the human rights system. The Committee calls on Canada to develop a well-structured dialogue with civil society to ensure that defending human rights in Canada is respected and supported. This includes an important recommendation that measures in the Income Tax Act limiting the ability of charitable groups to pursue advocacy be reformed.

The Committee also rejects Canada’s position that it does not have human rights responsibilities towards individuals and communities impacted by the activities of Canadian corporations, particularly mining corporations, operating in foreign countries. The Committee states that federal government must hold Canadian companies firmly accountable for the human rights consequences of their operations in other countries. There needs to be meaningful action on this front, including the establishment of a legal framework that affords effective remedies for victims, and an independent investigatory mechanism, echoing civil society calls for the appointment of an Extractive Sectors Ombudsperson.

The Committee expressed regret about Canada’s failure to comply with interim measure requests and with other views of the Committee when it is reviewing individual complaints against Canada. This growing pattern of disrespect for an independent expert UN body must end. Canada needs to put in place measures to ensure full and prompt implementation of all UN human rights recommendations.
Canada has the human and financial capital to heed the recommendations of the Committee, improve the implementation of its human rights commitments, and re-emerge as a global leader on human rights issues. The victims of human rights abuses cannot wait another ten years for a set of similar recommendations that Canada meets with inaction.

This set of UN recommendations is serious, important, and timely. This report needs immediate attention. That will not happen until and unless there is meaningful engagement at the political level. Federal, provincial and territorial ministers have not met in Canada since 1988 to discuss Canada’s international human rights obligations. It is time for them to come together and act.

The UN Human Rights Committee is comprised of independent experts from around the world. The Committee reviews the human rights compliance of countries that have ratified the ICCPR once every five or six years. Canada ratified the ICCPR in 1976. Its last review was in 2005.

This statement is endorsed by:
Aboriginal Title Alliance